A correction or just volatility?

The Covid pandemic (a once in a century event, one hopes) again accelerates briskly across Europe. The US Federal Reserve Bank has revised its policy objective (a once in three decades event). Debt levels are soaring (to historically unprecedented levels). A UK hard Brexit end-2020 (remains firmly on track). Estimates for future US growth reduced (after the post-lockdown dead-cat-bounce) and the US Elections (on track to become a once in a generation event).

Given the backdrop, thanks to monetary and fiscal policy running in overdrive, financial markets are remarkably stable. The September -10% drop in stock prices is not out of the current norm. Market participants are still holding their breath after the second US fiscal stimulus, expected by 1 August but never happened, and are now pinning hopes on the traditional “October surprise” ahead of 3 November election day.

Beyond the snap-shot picture of the financial market, we have a look at big changes taking place in the background with large long-term ramifications, but which does not attract the limelight in the market conversation, yet.

A snap-shot of the markets

A mini risk-off scenario has been developing since the start of September. We have communicated an early warning to clients based on observations from the ARA model’s 4-factor approach: Fundamentals, Volatility & correlations, Market intelligence and Technicals. The ARA model causality pointed out shift in asset correlations, more precisely in the asset cluster of inflation sensitive assets. Days later this was followed up by shift in the factor group Technicals.

Subsequently, stock investors have pursued defensive sector/regional rotation and bought protection to lock-in gains. We measure little signs of panic sell-off or even asset rotation – however – we also see that the tactical shift is still developing.

The financial media explanation after the fact, is, “the virus numbers are rising hence stocks must come down”. While this may sound intuitively simple the problem with such “traders short-cuts” is that they are unstable. Such correlations eg. did not exist a year ago. It also collides with another popular short-cut, “higher covid numbers mean higher FAAMG(n) stocks”, losing some 12% in value.

Covid numbers in Europe are indeed rising and coinciding with the correction in risk assets stocks/junk bonds. The point is that renewed Covid pickup occurs ahead of the seasonal flu season at a point when most people outside the analytical environment had expected the pandemic to be of the past.

Our view is that the return we feared of Covid does have some contribution to the contemporary financial picture. However, there are other factors of a more staying and structural nature below the market talk which seems to be growing in importance. Deep breath now.

At the end of august the US Federal Reserve released a statement that the institution from now on would not any longer adhere to a policy strictly designed to keep inflation below 2% per year. Instead the focus is shifted towards supporting the economy and hence the creation of new jobs. If that would imply that inflation would exceed 2 per cent, that would not immediately lead Fed to step on the brakes. Instead one would examine how things are in the labour market at that time.

This redirection of monetary policy only caused small ripples in the stock markets. It was taken as a confirmation that “Fed stands firmly behind the markets” and that Fed basically had given green lights for a further market increase.

Seen from a broader perspective, Feds statement was far more consequential than that. Most central banks have a “mixed mandate” of keeping inflation low and employment high.

Ever since the Reagan age, central banks have focused on inflation fighting and have not got too involved in supporting employment.

This consensus began to unravel after the Financial Crisis. More and more large central banks were nudged to accept the fact that inflation seems to be dead and take steps to support the economy. Even the largest inflation hawk of them all, ECB, went far to mitigate the effects of the austere fiscal policies of those years.

One by one, the Bank of Japan, Bank of England, the Swiss National Bank, Bank of Canada, the Reserve Bank of Australia and the Central Bank of India adopted more flexible policies and talk has even been about fostering inflation with the purpose of stimulating economic growth. With Fed now joining this camp, only the ECB is the last hold-out that officially “only” do inflation fighting.

However, we believe that under Lagarde, ECB will ditch the anti-inflation charter imposed by Germany 20 years ago and officially adopt a policy that is much closer to its broad mandate of – keeping inflation low and employment high.

This will mean that around the globe, central banks have essentially concluded that ed that inflation is not as important a problem as employment.

This will imply a moderately higher inflation over time and a continuation of the central bank policy of buying bonds in order to support the creation of cheap liquidity.

It will take (more) time to recover from this downturn

The US Congressional Budget Office – a strictly nonpartisan institution has quietly released its new 2020 Long-Term Budget Outlook. It was – unfortunately – a confirmation of the suspicion we signalled back in May, namely that the Coronavirus pandemic did not go away at the end of 2nd quarter. Instead CBO now signals a slower recovery. In fact, the CBO now expects that the US economy will only fully have recovered in 2028! By then, the US government debt will also have grown from the current about 100% of GDP to more than 200% of GDP, firmly in line with Italy and Japan (chart below). 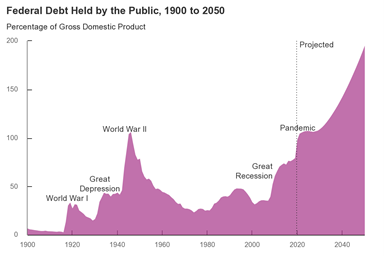 Federal Reserve is somewhat more optimistic regarding growth. According to the September “median” forecast, the US economy will at the end of 2023 be 4% smaller than would have been the case without CoViD-19.

All over the world, we now see growth forecast being adjusted and the tendency is clear: far from being short and sharp contraction followed by an equally fast recovery, we are now looking at several years of economic loss.

This will call for an adjustment of the economic policies brought in during March this year. Those policies are clearly unsustainable in the long term. But we have no signs that policy makers are nearing a consensus on what to do next.

These two tendencies will eventually influence the financial markets. Inflation will tick up, leading to higher long bond yields. Growth will recover slower than hoped for, bringing a higher risk of a wave of corporate defaults that were postponed by the aggressive central bank intervention in March. We see nobody who bring these two elements into their views of the markets. Go figure.