“Nobody saw it coming”

Once the Coronavirus has been successfully brought under control, the financial markets will begin to discuss who to blame for the abysmal investment results.

Most asset managers and investment advisors will defend themselves saying “who could have known it was coming?” and “yes, but we had no idea that this would not just be some normal choppy waters, the kind you just sit out”.

At the same time, it will be conveniently concealed that the balance between global bond and stock markets had solidly pointed out that something was out of kilter long before the coronavirus struck. Stocks were as pricey as ever. Corporate debt levels were (and are) at a historical high. Global economic growth was heading downwards without any major exceptions.

Immediately after the stock markets had fallen the first 25%, apologists were out in large numbers. Their message was as clear as in 2008: nobody could have seen this coming. Don’t do anything, just sit on your hands. Stick with your long-term investment strategy, the markets will recover.

We find that the part of the financial markets who charge money from their clients for providing “active” or “dynamic” portfolio advice just managed to fail abysmally. Again.

The four weeks from 21 February until the end of March proved that the largest part of the financial industry is mostly about selling products or services to the clients. We are revulsed to hear industry representatives who missed out on protecting their client’s capital now telling the same clients to “do nothing”.  This is a call for the clients to keep paying for the bad advice they just received, protecting the income of the financial adviser or asset manager.

Of course, the markets will recover. After the 2008 Great Recession markets recovered, eventually. Back then S&P took about 6 years to recover. Recovering from the ‘30s Great Depression took a mere 25 years. So much for “doing nothing”.

When we arrive at the point where we begin to sort through the rubble of the market melt-down we are certain that it will again be proven beyond any doubt that most equity fund managers underperformed the market. But it will not silence the voices that loudly defend the active managers against ETF’s.

Our business is tailor-made asset allocation, i.e. the balance between the asset classes in an entire portfolio based on the current market risk, the relative risk of the various asset classes and the customer’s risk profile.

We are entirely agnostic about the classes that may or may not be the best “long term” investment for all times. We see the long term as a series of shorter periods that we deal with in a systematic fashion.

Many people claim that “you cannot time the (stock) market”. That is not what we try to do either. Most of the time our work consists in small-ish gradual changes to portfolios as the economic variables change over time. Sometimes we have to make a dramatic call, such as our” zero equities” recommendation through February up until 20 March 2020.

We do not make such calls frequently. Having been in the financial markets for more than 30 years, we have only personally experienced 5-6 such episodes, beginning with the 1987 stock market rout.

We follow a large number of indicators and one of the important exercises is to process them statistically in a way that we quickly can follow when something is veering dangerously off track.

To the statistical nerds out there we normalise data allowing us to quickly identify when something goes badly wrong (yes, we do know that financial market data are NOT following a standard normal distribution, which is the point of the entire exercise).

To our more literary inclined readers, black swan events usually show up in several data series and not on the same time. If we take a broad look at the world, we get warning signals early enough to act. We may not always be able to see how deep the crisis will be, though.

Several central indicators pointed out that this episode had all the hallmarks of a serious disruption. Corona or something else, something significant was very likely to happen.

The first chart shows global activity (OECD) which was absolutely not impressive entering 2020. We have always hesitated to use the OECD Leading Economic Indicators as leading. We believe they are coincident indicators, if not for anything but the time it takes to collect and publish them. 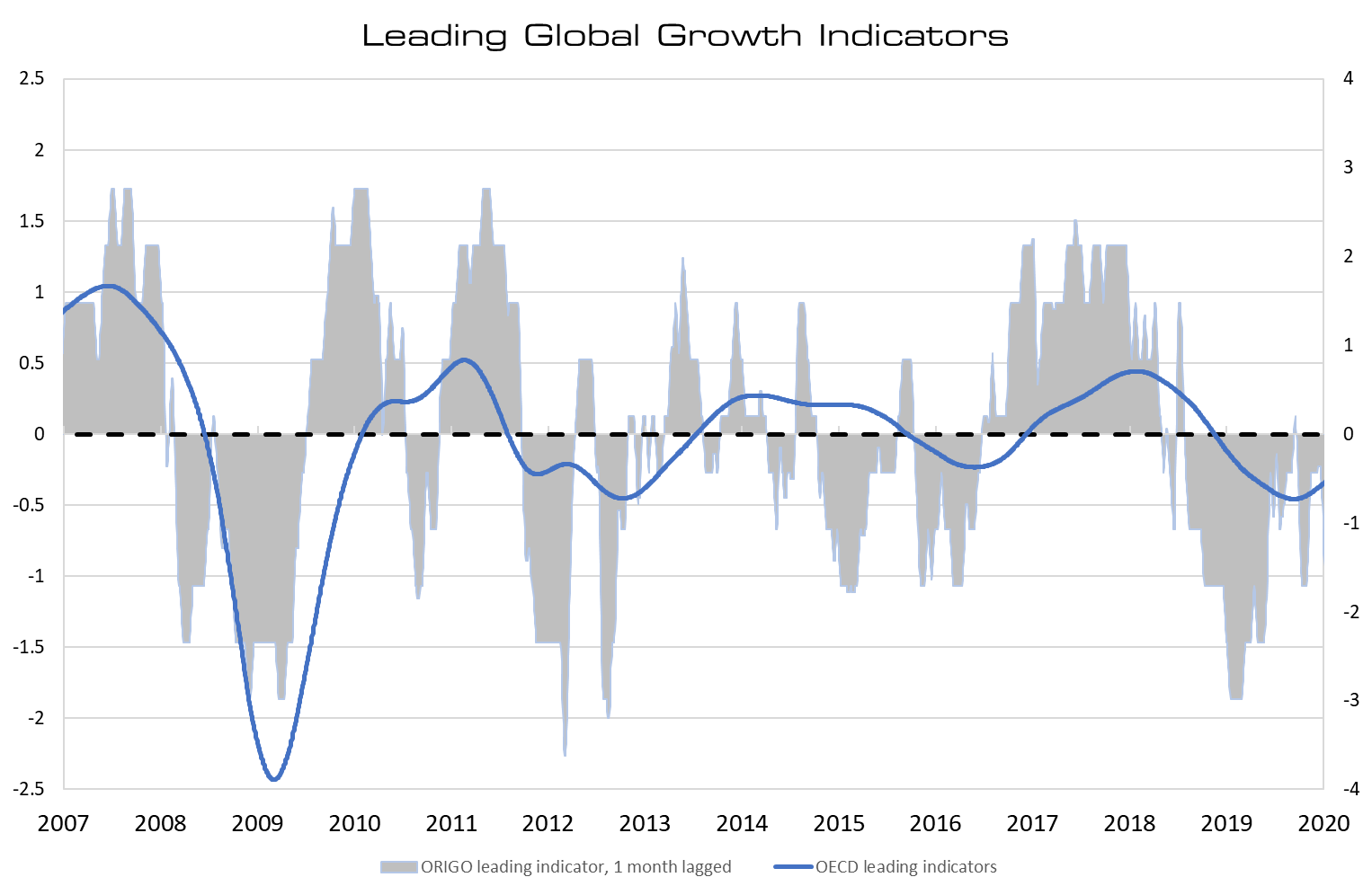 Our own in-house leading indicators told a quite different story. They pointed to a worsening of the global economic growth, quite possibly towards the 2.4% annual growth defined by IMF as indicating a global recession. Even the otherwise reliable Chinese economy was losing steam.

The second chart shows the two primary assets stocks and bonds. Usually one expects bond yields and stock markets to be positively correlated. Since early January 2019 this had not been the case. The bond market had understood that the underlying growth did not look good. In September of 2019 the bond yields bounced off their lows following a massive and renewed intervention by Federal Reserve and other central banks across the globe. 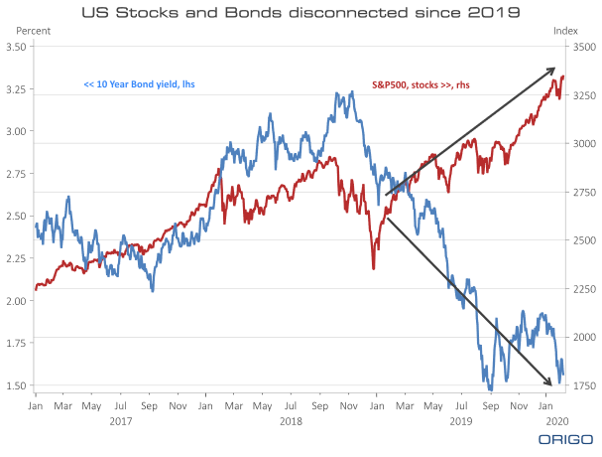 The stock market was as usually reacting to the resumption of central bank easing and not to the fact that corporate earnings had stopped growing. Slowly the stock markets had become used to expect that if the markets looked shaky; Federal Reserve would step in and again salvage the market. Repeated jawboning from US president Trump had only strengthened this perception

One factor making us particularly aware of trouble ahead was that the global stock markets did not react in a decisive fashion to the spread of the coronavirus in China and Europe. Bond yields increasingly reflected this reality from mid-January.

This dynamic triggered a big change in our asset correlation matrix.

Yet, despite epidemics breaking out in Italy and Spain, the stock markets seemed unconcerned.

And then, when the first patients died at a care facility in the US state of Washington without having had prior contact to anybody traveling in China, the US stock markets took note. The rest of the global stock markets only reacted as the US came to terms with reality.

A historic hit to the financial markets

Among the data we refer to as “Technicals”, we monitor stock market momentum (and yes, we normalise data). This time the momentum reached almost 8 standard deviations from the mean on 20 March. You may consult our insight from that day, titled “A concerted effort”. 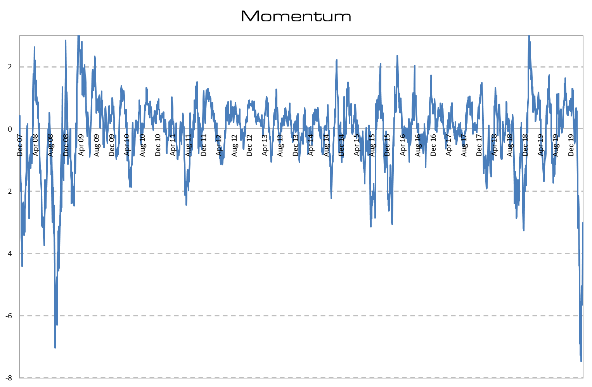 In 2008-9 momentum bottomed out “only” 7 standard deviations from the mean.

So, yes, what we just saw in the market is unprecedented in every sense of the word.