The return of market risk

On 25 May 2020 we wrote that something was afoot in the financial markets. We observed that both bond markets and stock markets were gaining on a global scale. It began to look like a rerun of the dynamics of January 2020 that led up to the stock market crash in late February. We also stated that at the time we could not foresee which of numerous potential events would trigger the next major market movement.  After having recommended a visible overweight in risk assets since end-March, our risk indicators are now on the rise. Our models now point towards trimming risk allocation quite significantly towards benchmark. In a portfolio whose mid-point is 50/50 between risk and non-risk assets, we recommend a balance of 50/50.

The Coronavirus pandemic is by no means over. Brazil is nearing a million cases, India 400,000 and the curves over the new cases still look exponential. China is fighting with new outbreaks in Beijing. African countries are at the beginning of getting into trouble. Seemingly past the peak, Europe – now including the UK. But in the US, the Mid West has taken over where New York started, meaning that the US new case count per day is about 25,000 while the death count has been falling steadily. The MidWest are in some 17 states still on the exponential part of the curve. Yet the Republican governors of those states have pressed ahead with re-opening the economies. 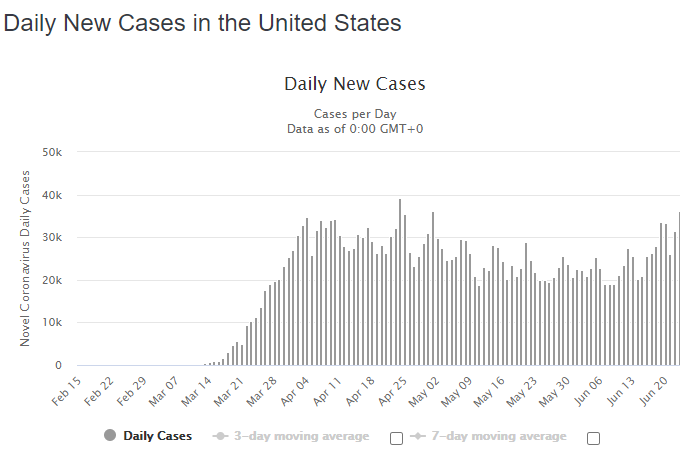 Whether we define this as the start of a ”second wave” or we whether maintain that this is still the “first wave” is immaterial. In a context of investments, the important thing is that the pandemic by no means is controlled in the USA.

Last week, the US stock markets realised that the pandemic just may stay with us over the summer and into the autumn. We may even see temporary re-closures if the number of new cases begin to spike. We have on an earlier occasion identified this pattern as a potential hindrance to economic growth in the US and if the growth slows here again, it will hold back the global economic recovery, simply due to the sheer weight of the US economy

Fed did little to calm reassure the stock markets

Over the past week Fed Chairman Powell has presented the Fed’s half-year report and gave testimony to the Congress. Powell’s statement was far from reassuring. Instead he pointed out that the return to normality would take quite some time and, ominously, he pointed to ongoing structural weaknesses in the US banking system. Regarding economic activity, hidden in the last pages of the semi-annual report we find a summary of the economic projections. The not-so-good news is that if you do the sums (which Fed carefully do NOT do) it becomes clear that the US economy at the end of 2022 will be at least 3.9% smaller than would have been the case without Covid-19. Similarly, unemployment is estimated to be at 5.5% in Q4 of 2022.

Even after all the aid packages and the expected recovery the US economy will still have taken a beating the size of a medium-sized “normal” recession. Regarding the structural weaknesses stated by the Federal Reserve: “financial system vulnerabilities – most notably those associated with liquidity and maturity transformation in the nonbank financial sector – have amplified some of the economic effects of the pandemic”.

The report does not say any more about this issue, but Fed’s expectations of a two year-recovery and the warning that something is rotten in the banking system, caused the US stock market to sit up and pay more attention. The result was a short but sharp fall of 8-10% in the stock markets and a recovery that lasted a few days. Our indicator framework however suggest that events coincide with signals that the risk-on phase has passed, and new dynamics have yet to establish.

The banks have been at it again

Coming back to Fed’s remarks on “liquidity and maturity transformation in the nonbank financial sector”, they could have been put in plain words. It is about the fact that US banks have lent 1.4tn USD in so-called “Leveraged Loans” as a means to help companies, mainly those in trouble and too small or too risky to issue corporate bonds. The term “leveraged” do not refer to the loans, but to the companies who borrow the money. They are often highly leveraged, so lending them money is inherently risky.

But just like in 2005-2007, the banks found a solution. Syndicate the loans, slice and dice them and wrap them in an SPV and divide into tranches of varying risk. Sell the riskiest to the most gullible players: private investors and pension funds. Keep the lowest risks on the banks’ own balance. And behold, previously risky loans have now been turned into AAA paper for the banks (and toxic waste for those who buy the risky slices). CLOs are born.

To distance themselves further from the business, specialised CLO managers handle the loan portfolios. CLO managers are unregulated. They offer no transparency regarding the management of the collateral, no information of special cuts or kickbacks, details the regulated financial sector post MiFID2 must disclose. In recent years private and institutional investors have snapped up significant volumes of CLO’s as an alternative to bank deposits. Say no more. Nudge, nudge, wink, wink. By construction, CLO’s may not follow the moves in the short-term money markets.

However, to promise investors a high yield while swearing that the asset is without risk and still highly liquid stretches all knowledge of the function of the financial markets. For the banks there is only one small downside: Even the best slices of the CLO pie are highly illiquid. So, following the release of the half year report, Federal Reserve opened a new facility to buy AAA CLOs off the banks [if necessary]. This could well prove necessary since US SIFI banks hold CLO’s corresponding to 60% of their capital. Off course the CLOs are as safe as money in the bank. Until the moment where the underlying borrowers go belly up. CDO’s (“subprime”) were also safe right until the moment they blew up.